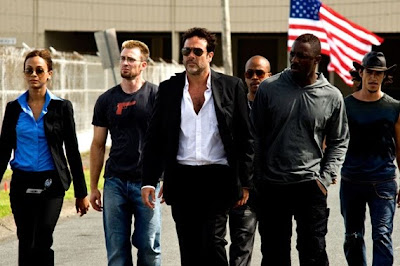 With gleeful abandon, Sylvian White's The Losers announces its presence as a high-octane energy jolt with the first sound of gunfire and manages to sustain the mayhem one-notch above insane for the duration.

Bordering on complete parody with its derivative plot turns, hammy villains and both visual and vocal references, it's this enduring electricity and ultimately worthy cast that sees the film through.

Adapted by Peter Berg and James Vanderbilt from a Vertigo comic series, the film is like a traditionally-plotted 80's action-potboiler put through the 21st century comic-book freeze-frame wringer, complete with splattered, hand-drawn opening titles.

Andy Diggle's source material is hardly ingenious, following a group of U.S. operatives set-up by an evil weapons-dealer known as Max (the loony Jason Patric). The members of this particular A-Team - left for dead in the Bolivian jungle - are played well by a recognizable group of solid B-level actors like Chris Evans, Idris Elba, Columbus Short and Jeffrey Dean Morgan.

When the mysterious and similarly revenge-minded Aisha (Zoe Saldana) shows up to offer Clay (Morgan) a chance to get the boys back to the States and take Max out, this once prominent team of misfits gets together one last time in an attempt to clear their names.

Director Sylvian White (Stomp the Yard) pulls out all of the expected genre tropes, framing and manipulating his aggro-rock action scenes as if taking a snapshot from one of Mark Simpson's lovingly rendered comic panels - utilizing jump-cuts, quick-edits and slow-motion to dress-up the gunplay.

Dealing in the visual aesthetics of Zack Snyder sans the self-seriousness, or Guy Ritchie sans the convolution, The Losers is a surprisingly agreeable film despite the fact that our likeable heroes are far more accurate with their guns than with their words. [B-]
Posted by Chase Kahn at 4:57 PM