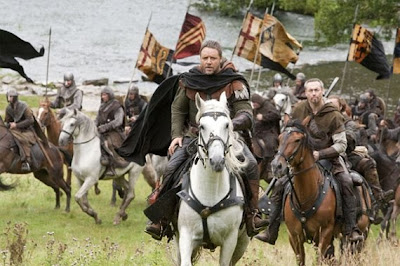 It doesn't take but a few minutes for Ridley Scott to remind you of his ability to shoot a convincing sword-and-chainmail action scene. Often throwing the camera right in the the thick of the battle and accenting each pulsating arrow as if the audience were in the infield at Daytona, Robin Hood lacks no production values, it lacks distinction and a reason to exist.

Not without its indelible moments or imagery - the burlap mask of a teenage grain-thief and the repeating villainous motif in Marc Streitenfeld's otherwise tasteless musical score leave minor impressions - the overall viewing experience eventually becomes more akin to King Arthur than Gladiator.

Billed as the "story behind the outlaw," this surprisingly light and cloying Robin Hood isn't so much a folklore prequel as it is a retelling and re-ordering of the oft-finagled legend of defiance in the face of tyranny. After all, the High Sheriff of Nottingham has gone from Melville Cooper to Alan Rickman - showing the disparity in villainy between the wonderful Adventures of Robin Hood ('38) and the well-scored Prince of Thieves ('91).

Here, in the time before Sherwood Forest and his merry men, the face of injustice is Sir Godfrey (the endlessly typecast Mark Strong), who is conspiring with King Phillip of France in sneaking troops across the Channel to overthrow the loud and inexperienced King John (Oscar Isaac). If you were unsure of Sir Godfrey's intentions, his place as chief villain is all but assured when he receives a close shave at the hands and bow of a talented archer, laughably leaving a scar that will remind more than a few people of Heath Ledger's The Joker.

And that archer is none other than our titular folk hero, Robin Longstride (played all too comfortably by Russell Crowe) who returns back from the Crusades under a new identity as Robin Locksley, the deceased nobleman and former husband of the now-widowed farmhand Lady Marian (Cate Blanchett).

Robin means to drop off and deliver a sword to an aging father (Max von Sydow) in honor of his only son, a sword that is engraved with the oft-repeated phrase, "Rise and Rise Again, Until Lambs Become Lions." The phrase becomes a key cog in the revealing of Robin's past (done so rather hoarily through blurry flashbacks) and in his destined rise as deliverer from a French invasion now, a tyrannical King John later.

It is here in the comparatively sunny and green-streaked farming town of Nottingham (resembling Hobbiton of sorts with its dancing, singing, bare-footed inhabitants) that Robin Hood, mostly through its forced romance and prepared plotting, becomes the bland, nonthreatening studio-drivel that it is.

In a matter of minutes, the straining, obvious jokes and the false, wayward love stares between Robin and Lady Marian soon begin to pile up as often as the dead bodies until the climactic seaside battle scene washes ashore like any assembly-line historical action film - and with the tide go our expectations. [C-]
Posted by Chase Kahn at 7:26 AM