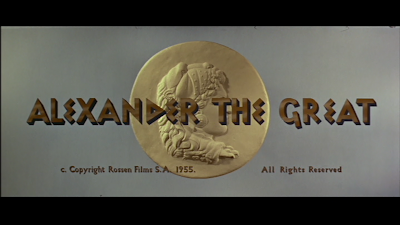 Regarded as both a major critical and financial failure for MGM at the time of its release, Robert Rossen's Alexander the Great ('56) certainly has a reputation on or below par with the overcooked historical epics of its day (becoming more negatively perceived with each year) but the result may not be so much a bad film as a negligible one.

Rossen's handsomely-mounted biographical illustration of the short and prosperous life of the titular Alexander (Richard Burton) charts his early years competing for power over the Greek city-states with his father, King Philip II (Frederic March). The angles get wider in the second act as Alexander exerts his uninhibited will out East in the Persian campaign.

Originally around three hours in length, Rossen was pressured by the studio to make cuts down to 135 minutes, and the result is an unceremoniously choppy and overly histrionic affair. Cinematographer Robert Krasker and Art Director Andre Andrejew capture the wide-angle CinemaScope landscapes of Spain to perfection (serving as the rolling, rocky hills of Greece) , but what Alexander the Great lacks is a through-current of emotional sweep and artistry to match those meticulously-rendered vistas of Macedonia and Persia. 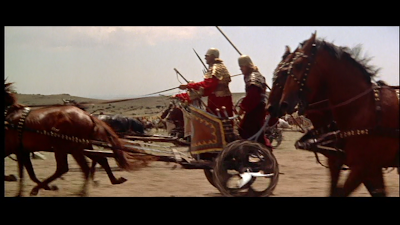 Richard Burton, in this early stage of his career, had already dipped his toes into the large waters of the ancient sword-and-sandals epic with Henry Koster's The Robe ('53), but his Alexander is one dull bird. Rossen attempts to highlight his subjects insatiable appetite for conquest and immortality, driven by an apparent delusion of divinity.

The problem is that Burton makes him insipid and flat. When he isn't glowering at his father, King Philip II or playing the Ancient Greek version of wife-swap, he's getting lost in the widescreen compositions of Rossen's awkward, nonsensical battlefield maneuvers. [C]