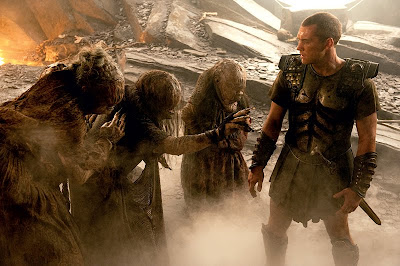 Louis Leterrier's stiff and snappy Clash of the Titans remake certainly picks up on some of the unabashed cornball mythology of the 1981 original, but what it brings to the table in terms of digital enhancement and Kraken-sized spectacle, it concurrently flounders in the same excess, its characters reduced to vapid machismo brutes.

Our hero is Perseus (played by a grumpy Sam Worthington) who is one ticked-off demigod (the best of both worlds) and the son of Zeus (Liam Neeson) who himself is a god-in-crisis, mortally panic-stricken over the lack of faith in his human pawns who seek to declare war on their heavenly creators.

When Hades (Ralph Fiennes) rises from the underworld, he convinces his brother Zeus to unleash him upon the ungrateful humans and get them grovelling on their knees once more. Knowing that Hades has awoken - his pet Kraken waiting under the ocean floor - the humans of Argos, now in possession of their demigod, set off on a whirlwind quest to seek the knowledge they need to beat the unbeatable.

Interspersed amongst the goofily diverting scuffles against giant scorpions and an irascible Medusa are tired, huffy line readings about the queasy distinctions between man and god, destiny and faith. Perseus feels conflicted about using his naturally celestial powers, instead wanting to rely on his mortal behalf to get the job done. ("If I do this, I do it as a man," he blurts.)

Among the Argos-led traveling party are Draco (played by a squinting, fun Mads Mikkelsen), Ixas (Hans Matheson), Eusebios (Nicolous Hoult) and a robed, eternal and quite silly Io, who is played by a pretty face, Gemma Arterton. Io is a nymph, dedicated to watching over the abandoned demigod for life and on the journey, she serves as the Navi to Perseus' Link. Like a big, pretty bug that just won't go away, she flutters about the screen (her hair becoming more ideal and shiny as it progresses) like a nuisance.

The stable of screenwriters attempt to make an everlasting love story out of Io and Perseus, but the result is executed just as feebly and uncomfortably as when our Praetorian fellowship try to uncouthly crack a couple of jokes.

The saving grace of Clash of the Titans is the revolving door of mildly rendered and increasingly scaled creatures - for if nothing else, it shuts up those sullen, crabby humans and their flirty, part-divine companions. [C]
Posted by Chase Kahn at 7:19 PM