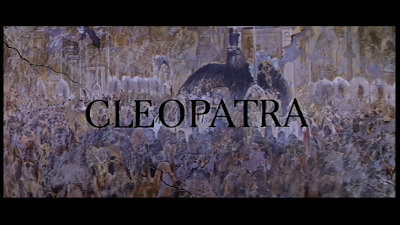 Shrouded in historical scandal both on and off the screen, Joseph L. Mankiewicz' Cleopatra (1963) is a lengthy, bombastic first-rate production that is both ameliorated and smothered by its ceaseless excess and towering histrionics.

Infamously known as a massive monetary failure, Cleopatra was actually the highest-grossing film of 1963, pulling in approximately $26 million at the box-office. The problem is, it cost almost twice as much to make, containing enough behind the scenes drama to make even Cleopatra herself blush.

Original cast members Peter Finch and Stephen Boyd darted the production around the same time as original director Rouben Mamoulian did. And Elizabeth Taylor - apparently before her widely-reported adulterous affair with co-star Richard Burton - suffered from a serious illness, resulting in an emergency tracheotomy to be performed during shooting. (You can visibly see a scar on her neck in certain scenes.) 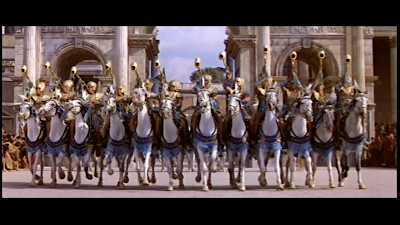 And although its reputation is brutal - both financially and critically - perhaps diminished expectations made the 243-minute sit relatively painless. The presentation gives the film a polished feel (I love the overture and the transitional fades to and from live-action to a chipped stone-tablet painting) and the dialogue is lively, but the biggest problem with the whole thing is a significant absence of any kind of discernible pulse.

Like a sphinx, Cleopatra is a blank, emotionless affair that - because its characters are all scheming, self-absorbed bores - becomes a parade of extravagantly and impressively designed costumes and sets, supplying proof of its monetary backing without much cause for it.

For all of the film's attempts to make tragedies out of the characters of Julius Caesar, Mark Antony or the titular Queen Cleopatra VII, the biggest discernible trait in this talky eye-popper is Elizabeth Taylor's plunging neckline. [C+]
Posted by Chase Kahn at 8:32 PM