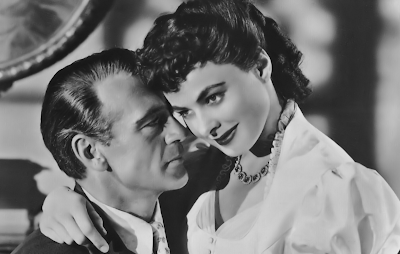 Ingrid Bergman plays the feisty Clio Dulaine in Sam Wood's Saratoga Trunk ('45) as a woman who returns home to her native New Orleans to redeem her deceased mother's demise at the hands of a mercilessly aristocratic 19th century society.

Based on the 1941 Edna Ferber novel, Saratoga Trunk shares many traits with her other works in its depiction of a grinding, culturally divergent relationship set amidst a backdrop of Southern gentility and civil revolution.

Walking the streets of New Orleans like a tried-and-true countess, Miss Dulaine (Bergman) first catches the gaze of a Texas gambler named Clint Maroon (Gary Cooper), but despite her affection for his tacky white ties and French cuisine ignorance, she soon realizes that he has no part to play in her plot to uproot the Louisiana social order. 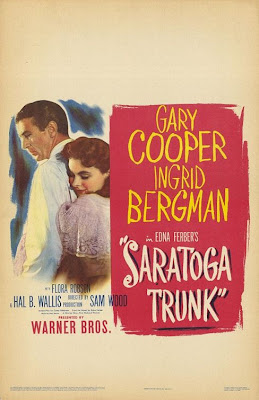 And as Clint, in turn, learns of her wicked intentions, he becomes both frustrated and infatuated by her beauty, vulnerability and flippancy - the kind of irresistibility that brings to mind the testy romanticism of Rhett Butler and Scarlett O'Hara.

Fortunately Ingrid Bergman and Gary Cooper make the comparison an easy one and an apt one in terms of quality. They glisten when they're both on screen, and it's befuddling to consider that a brave, vibrant and breakneck role like this failed to garner any awards consideration when the quiet repression of a lesser role in George Cukor's Gaslight ('44) did exactly that.

Making the neglect all the harder to swallow is the fact that co-star Flora Robson took the sole nomination for Saratoga Trunk for Best Supporting Actress by applying a nasty layer of brown make-up for her role as a mulatto caretaker named Angelique in what is easily the most discernibly tacky and misguided aspect of a generally tactful production. [B+]