I'm lost today - lost to find a meaning into the unanimous praise across the board for James Cameron's Avatar, which looks poised to carry over into the new year as a critical and audience favorite, and most likely your leading candidate for Best Picture. Right? It certainly feels that way. 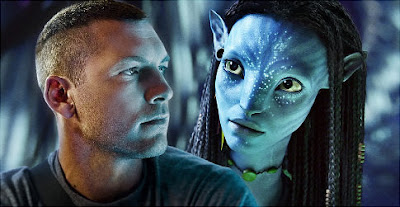 I just don't understand how Cameron's film, with it's blatantly lazy scripting, which forgoes any semblance of characterization, dialogue and plotting in favor of easy cliches, gets the free pass for its admittedly impressive visual bath. What we get here is a re-skinned Pocahontas/Dances With Wolves, a pair of 3D glasses and with a pat-on-the-back are told it's the future of filmmaking. If that's true, I don't want any part of it.
Avatar is simply the white bread of movies. It doesn't bother with taste or texture or the nuances that make certain breads so tasty (that you might have to make a trip to specialty foods store to seek out), but it appeals to the widest possible audience (you can grab it at Walmart, Kroger, Tom Thumb, everywhere!).
Old people like white bread, kids like white bread, almost everyone likes white bread, or more so, just accepts its mediocrity. And such is the fate of Cameron's 160-minute epic, which is pieced together from particles of every science-fiction/indigenous species/pro-ecology material ever written down or committed to screen and tidied up into a 3D motion-capture, CG-blitzkrieg to hide its shortcomings. It has all the sensibility and sophistication of a Disney cartoon or a SyFy Network series.
It's not even fluently conceived, either. With names like "Pandora" and "Avatar" and "Hometree" and the way the Na'vi "link-in" to their methods of transportation or capture. It's like the concept was lifted from a young adult novel in the clearance section at Half-Price Books. It took you twelve years and this is what you come up with?
Posted by Chase Kahn at 3:27 PM