Tomorrow at 5 am (!) PST, the Golden Globe nominations will be announced and read aloud for the world to hear by John Krasinski, Diane Kruger and Justin Timberlake. One of the interesting aspects of any celebrities announcing nominees is the ever-present possibility of a personal gain to said announcer. Krasinski could call the name of his newlywed, the lovely Emily Blunt, while Diane Kruger could possibly be reading her own name for her supporting role in Inglourious Basterds (although that's more of a long-shot). 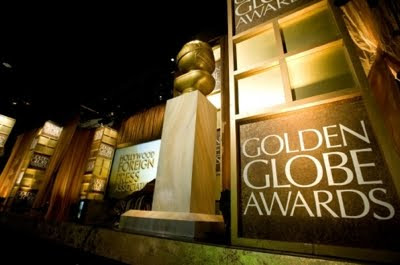 It should be interesting given that the Oscar Best Picture slate expanded to 10 nominees this year, and there will undoubtedly be a few heavy-hitters who miss the cut as well as a few off-the-radar picks sneaking in (think The Great Debaters in 2007).
I've always hated the Comedy/Musical category and the Hollywood Foreign Press always whore out their slate with starpower over quality, but it can definitely pick up or slow down a film's chances of Oscar glory. Nevertheless, you can bet on Kathryn Bigelow's The Hurt Locker being a major player, which won another major critics award courtesy of the New York Film Critics Circle today.
I'd like to play the too-cool-for-school cynic and realize the idiocy of the Golden Globes, but I'll be up at 7:00am CT time, being sure to mute the TV when Ben Lyons speaks.
Posted by Chase Kahn at 7:27 PM