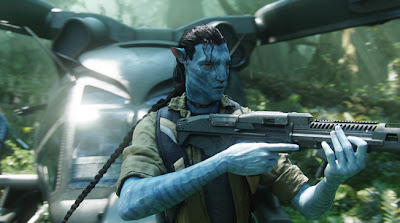 Well, despite a reported December 18th review embargo (coincidentally the film's release date), Variety's Todd McCarthy and Hollywood Reporter's Kirk Honeycutt have already chimed in on one of the most anticipated (or curiously awaited) films of the year. McCarthy gives it a pleasant hurrah ("all-enveloping and transporting"), while Honeycutt flat out does cartwheels for the thing ("How will Cameron ever top this?")
As a self-proclaimed Avatar skeptic, this good early word is surprising and half-welcoming - I'm now a little excited about this $300+ million 3D bonanza. Having written this thing off months ago ("The Na'vi look like blue goats"), it gets my blood flowing a little to be looking forward to something, although I'm still not completely sold on it.
Posted by Chase Kahn at 9:46 PM