"The Loss of a Teardrop Diamond", which opens in NY and LA on Wednesday (12.30.09), is an adaptation of an unused Tennessee Williams script written in 1957 and unavailable until Williams' death in 1983. 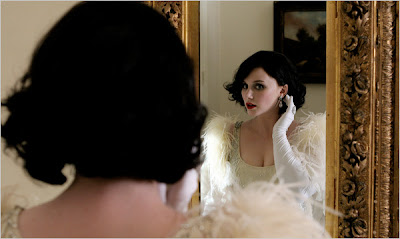 This 12.23 Charles McGrath piece discusses how stage and screen actress Jodie Markell began pursuing the script all the way back in the early 90's. Now the 51-year old actress, in her feature-length debut behind the camera, brings the neglected script to screen.

Bryce Dallas Howard takes on the lead role as a "young Blanche DuBois", the delusional aging character played in Williams' classic play "A Streetcar Named Desire." The film expands to larger markets throughout January, and surely this won't bear the imprints of a lost Elia Kazan film, but I'm interested.
Posted by Chase Kahn at 8:31 PM