Raoul Walsh's High Sierra ('41) was the last film that Humphrey Bogart made in his career in which his name did not receive top billing. Watching the film today, it's obvious why. Bogart, as the newly-released-from-prison, notorious bank robber Roy 'Mad Dog' Earle, is magnetic and stoically iconic. His seemingly disproportionate head size making for a threatening profile via shadowy noir-thrillers of the late 30's and 40's, featuring running-clock, last-ditch tough guys and the dames who are so attracted to their fedoras, their wealth, and the gun. 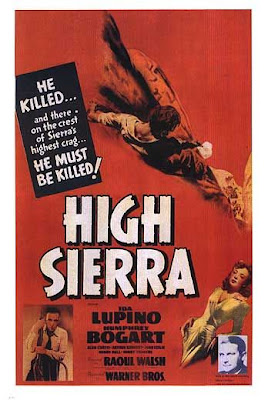 Ida Lupino is the first name listed on the credits for High Sierra, a film not without faults to be frank with you. The screenplay was written by W.R. Burnett and John Huston (before he would go on to direct Bogart himself in countless other noirs and adventures throughout the 40's and 50's) and it tells the simple story of an outlaw, granted a new lease on life, who desperately, though secretly, wishes to retire from his aimless existence as a bad-tempered baddie and find some purpose.

He intially finds it in a young, crippled girl named Velma (played by Joan Leslie in her first major screen role), whom Roy (Bogart) decides to help by funding her operation to get her walking again. It's also here where the film tends to border between mawkish laziness and genuine character-building.
A relationship between Roy and a scruffy dog named Pard and a heavily-stereotyped African-American lodgehand named Algernon also date the film somewhat, but most inexcusable of all are the plot holes in Burnett and Huston's script involving key decisions by characters.
Nevertheless, High Sierra tells a story of a man looking for redemption and finding none of it - a classical plotline for the noirish gangster/crime films of Michael Curtiz, Archie Mayo, Raoul Walsh and later, John Huston. And for the most part, it succeeds, but mostly because of Humphrey Bogart, in his star-making role. There is also some very nice on-location shooting in the Sierra Mountains, and a particularly wonderful T-model mountainside car chase - one of the few times where the shot composition and editing are first-rate.
I think High Sierra is a minor film in the pantheon of the gritty crime films that Warner Bros. was so well-known for at the time, but it is certainly a major film in the career of Humphrey Bogart, who would rightfully replace James Cagney as the flag-bearing baddie of the silver screen throughout the 1940's, a decade that would prove to be kind to him.
Posted by Chase Kahn at 8:21 AM