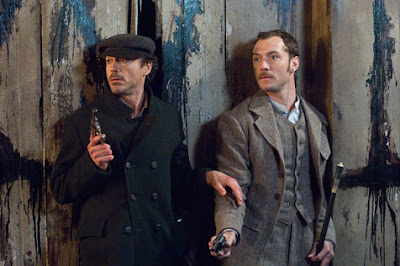 And considering the out-of-this-world trajectory of Robert Downey Jr.'s current career path, it will a) feature the actor doing his best fast-talk, ironic, smart-ass maneuvers and b) will make a shitload of cash over the Christmas break.
I'm kind of half-interested in seeing it once my slate is clean. (I'm honestly more interested in Rob Marshall's Nine, Tom Ford's A Single Man, Peter Jackson's The Lovely Bones, etc.) But the one thing that could persuade me slightly is overwhelming giddiness by the leering press. So far, the temperature is, "good, fun, entertaining - audiences will love it".
InContention's Kris Tapley just slapped it on his Best of 2009 List, and Variety's Todd McCarthy gave it a mild approval, although that involved calling it, "amusing and rather flagrant" - hmm.
Posted by Chase Kahn at 7:02 PM