Dargis on "A Single Man"

I missed the influx of noteworthy criticisms and writings this weekend because of a) the unveiling of James Cameron's soon-to-be landmark film, Avatar, and b) because of the overwhelming quantity of awards groups dolling out their picks for the best films of the year, and thus, painting the picture of the inevitable Oscar nominations. 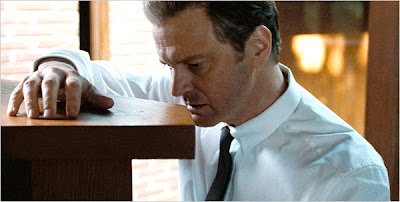 Well, most noteworthy of all was Manoghla Dargis' NY Times review of Tom Ford's A Single Man, which is out now in New York and Los Angeles. Here's the abridged version:
"The face of grief that the actor Colin Firth wears in “A Single Man” is crumpled and gray. There is little movement in the face initially: it’s a beautiful and gently furrowed mask, not yet old, despite the small brushstrokes of white at the temples. You might think that gravity alone was tugging at its mouth. But George, the middle-aged professor and single man of the title whom Mr. Firth plays with a magnificent depth of feeling, has had his heart broken, and the pieces are still falling."
"The film, directed by Tom Ford, follows the outlines of the landmark 1964 novel of the same title by Christopher Isherwood (1904-1986), the openly gay British-born author whose story “Sally Bowles” was turned first into the play “I Am a Camera” and later the musical and movie “Cabaret.” An intensely, at times uncomfortably, intimate work of fiction, “A Single Man” condenses George’s story — much of his very life — into one emotion- and event-charged day. What makes the day special, and the book too, is George’s existential condition. George is single. And he is a man. But he is also a homosexual, which helps set him and his lusting, fading body apart from almost everyone in his life."
"That Mr. Ford has placed so much weight on Mr. Firth suggests that he knows how valuable his actor is to his first effort. And while “A Single Man” has its flaws, many of these fade in view of the performance and the power of Isherwood’s story. Part of the radical importance of Isherwood’s novel is its insistence on the absolute ordinariness of George’s life, including with Jim, whose relationship together is pictured only briefly in both the novel and the film, and yet reverberates deeply (then as now). Mr. Ford’s single man might be less common than Isherwood’s, a bit too exquisitely dressed. But with Mr. Firth, Mr. Ford has created a gay man troubled by ordinary grief and haunted by joy, a man apart and yet like any other."
Of course, among other things, Colin Firth is a Best Actor lock for his work here, which has been talked about ever since it premiered in Venice back in September. A Single Man expands on Christmas Day to smaller markets.
Posted by Chase Kahn at 9:30 AM