James Cameron's Avatar finally releases on 3,400+ screens tomorrow and, as I'm sure you are well aware of by now, the feedback on the film to this point as been giddy to say the least, and it even managed to pick up a Golden Globe nomination for Best Motion Picture Drama on Tuesday morning - very much cementing its status as a major Oscar contender. 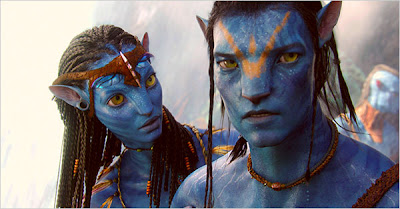 The New York Times' Manohla Dargis, one of my very favorite writers and certain the best female film writer in the business, expressed her opinion just moments ago in a reserved, yet gleeful rave.
"The scale of his new movie, which brings you into a meticulous and brilliantly colored alien world for a fast 2 hours 46 minutes, factors into that wow. Its scope is evident in an early scene on a spaceship (the year is 2154), where the passengers, including a paraplegic ex-Marine, Jake (Sam Worthington, a gruffly sensitive heartthrob), are being roused from a yearslong sleep before landing on a distant inhabited moon, Pandora. Jake is woken by an attendant floating in zero gravity, one of many such aides. As Jake himself glides through the bright cavernous space, you know you’re not in Kansas anymore, as someone soon quips (a nod to “The Wizard of Oz,” Mr. Cameron’s favorite film). You also know you’re not in the gloom of "The Matrix."
"The first part of Jake’s voyage — for this is, above all, a boy’s rocking adventure, if one populated by the usual tough Cameron chicks — takes him from a wheelchair into a 10-foot, blue-skinned Na’vi body. At once familiar and pleasingly exotic, the humanoid Na’vi come with supermodel dimensions (slender hips, a miniature-apple rear); long articulated digits, the better to grip with; and the slanted eyes and twitchy ears of a cat. (The gently curved stripes that line their blue skin, the color of twilight, bring to mind the markings on mackerel tabby cats.) For Jake his avatar, which he hooks into through sensors while lying in a remote pod in a semiconscious state, is at first a giddy novelty and then a means to liberation."
"After a few minutes the novelty of people and objects hovering above the row in front of you wears off, and you tend not to notice the 3-D, which speaks to the subtlety of its use and potential future applications. Mr. Cameron might like to play with high-tech gadgets, but he’s an old-fashioned filmmaker at heart, and he wants us to get as lost in his fictional paradise as Jake eventually does. On the face of it there might seem something absurd about a movie that asks you to thrill to a natural world made almost entirely out of zeroes and ones (and that feeds you an anticorporate line in a corporately financed entertainment). But one of the pleasures of the movies is that they transport us, as Neytiri does with Jake, into imaginary realms, into Eden and over the rainbow to Oz."
"If the story of a paradise found and potentially lost feels resonant, it’s because “Avatar” is as much about our Earth as the universe that Mr. Cameron has invented. But the movie’s truer meaning is in the audacity of its filmmaking."

"Few films return us to the lost world of our first cinematic experiences, to that magical moment when movies really were bigger than life (instead of iPhone size), if only because we were children. Movies rarely carry us away, few even try. They entertain and instruct and sometimes enlighten. Some attempt to overwhelm us, but their efforts are usually a matter of volume. What’s often missing is awe, something Mr. Cameron has, after an absence from Hollywood, returned to the screen with a vengeance. He hasn’t changed cinema, but with blue people and pink blooms he has confirmed its wonder."

Avatar currently sits at 83% on RT and a stout, surprising 83 on Metacritic. Tomorrow it all goes down. I personally find comparisons to The Jazz Singer ('27) or Gone With the Wind ('39) in terms of changing the climate or possibilities of the movie medium over-exaggerated, but of course, admittedly, I haven't seen it. As much as I've been somewhat resenting this day (tomorrow) all year, I admit I'm personally very excited for tomorrow.