David Poland's 12.03 review of Rob Marshall's Nine (Weinstein Company, 12.25.09) echoes the sediments of InContention's Kris Tapley almost like the two compared notes at a screening.
"Nine is a movie with two memorable songs, performances that are routinely better than what the performers are given to perform, a problematically intense but not charming performance at the center, and most painfully, a lack of basic storytelling." 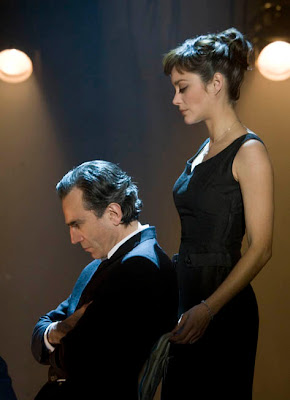 "What we get...is a rather symmetrical series of music videos with two women he's fucked, two women who he hasn't and knows he shouldn't, a whore (literally), and two Madonnas in mama and wife. Rob Marshall [director] knows how to come up with specific ideas in these music videos and he knows how to deliver what he wants."
"But what he wants is often painfully confused and superficial."
This all goes back to what Anne Thompson said (who is a fan of the film), when she described it as a "guilty pleasure". Surely with the NBR ignoring the film yesterday and early word ranging from "not bad, fun" to "problematic and slim - a music video thing", it's no longer a contender. We'll see, though.
Posted by Chase Kahn at 8:23 AM