Yes, David Lean's Doctor Zhivago (1968), possibly my favorite from the director, will be released on Blu-ray sometime next year, but the bigger question is why Lawrence of Arabia (1962) or The Bridge Over the River Kwai (1957) were not the first David Lean films to hit the high-def format, seeing as how they're undeniably more universally appreciated.
I've tried to locate the home video distribution rights to both films and came up empty. Regardless of studio properties, all three should already be out on Blu-ray - if there were ever a set of catalogue classics that demanded it, it's the work of David Lean. 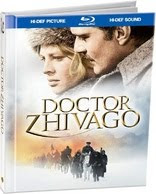