The Utah-born director Frank Borzage, son of an Austrian-Hungary father, was one of the few Hollywood directors willing to chronicle the rise of Nazism overseas in his films, and none were more direct, or subtly moving, than 1940's "The Mortal Storm" for MGM. 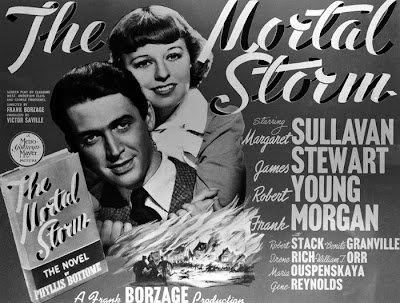 Obviously, U.S. participation in the war hadn't yet come to fruition, and what this clear and concise anti-Nazi film did was to inform and shed light upon the rise of the Third Reich and Fascism, particularly, the capture and internment of the Jews through the eyes of a German family.

The film, adapted from British writer Phyllis Bottome's novel of the same name, chronicles the Roth family, particularly their young daughter Freya (Margaret Sullavan) and her relationship with a young farmer, Martin Breitner (James Stewart). The Roth's aren't specifically described as being Jewish, but are instead labeled simply as "non-Aryans." The exception being their two stepsons, Erich and Otto, who now don Nazi patches on their left biceps and rough up Mr. Breitner when he visits Freya.

Now, a subject so identifiable and obvious could have been an overwrought drag, but the constraints of Hollywood censorship at the time could arguable have saved the film from being too clear-cut.

The country of Germany is rarely even mentioned, nor the Holocaust or the Jews. All of this was done at the time, to limit the film's potential offensiveness overseas, but to no avail. The Germans not only crucified the film, they banned any and all MGM releases from that point forward. This kind of egg-shell, non-confrontational removal of small details keeps the film on track and from indulging in maudlin, barefaced imagery. It keeps "The Mortal Storm" refreshingly restrained and delicate as Margaret Sullavan and James Stewart attempt to escape the ongoing witch hunt in the film's final act, hiking through the German mountains on skis. 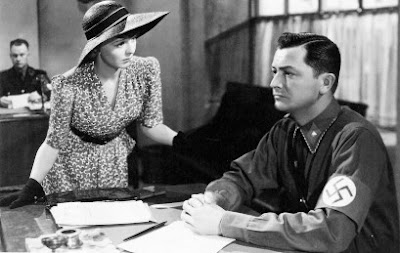 It's a film that portrays the dangerous power of propaganda and faith better than most, as members of the Roth family (at the outset, a lovable, peaceful and healthy family) and their closest friends, drop into the ranks of the Third Reich. Among many things, it's an indictment on the current condition of the human race before hinting at its inevitable recovery with a stunning final scene. A set of footprints in the snow leading up to a doorway disappear before our eyes set to a calm, soothing voice-over of Marie Louise Haskins' poem, "The Gate of the Year" ("Give me a light, that I may tread safely into the unknown...")

"The Mortal Storm" isn't the first film that Borzage made depicting the rise of Nazism (see 1938's "Three Comrades"), but it is his clearest, his most accusatory and his most well-known. Although good luck finding a copy of it on DVD - it can only be seen currently on either TCM or by order from the Warner Archives.

This was also the last film that Margaret Sullavan and Jimmy Stewart ever made together. They previously worked on Ernst Lubitsch's 1940 masterpiece, "The Shop Around the Corner."