What Does Your Life Weigh?

I don't have the time, energy or grip to write anything substantial about Jason Reitman's Up in the Air, which I finally saw last night. But I can say that it was a marvelous slice of character drama - perceptive, keen, truthful, etc. - it moves like a Cameron Crowe film circa Jerry Maguire. That is, it's a comedy centering around a high-class businessman in the midst of a serious existential crisis of identity and love. 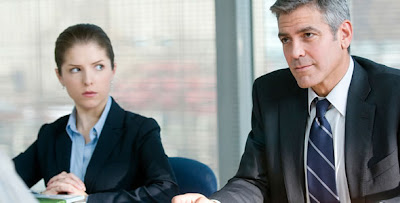 It's whip-smart funny for the majority, with terrific performances by Vera Farmiga, Anna Kendrick and a revelatory turn by George Clooney that is so true-to-form and easy to believe that it will probably be taken for granted. Then the film turns moody and reflectingly self-serious, which I was completely fine with and frankly welcomed.
The problem is that Up in the Air is too funny in its first two-thirds. It's so smart, lively and playful that by the time Reitman turns up the gears and gets into the meat of this thing, it's harder to adjust and it makes me feel like this thing should have either been re-toned, with more emphasis on the drama. Not that I didn't appreciate the Coriolis-like deflection that it undergoes, I actually found it more compelling than the nevertheless humorous, easy-breeze comedy that came before it.
Besides the rough tonality of the film, I think it has a ton of endearing qualities and I loved the character path of it's main character, Ryan Binghan (Clooney), a jet-setting, nomadic, loose-end cutting smoothie with an affinity for elite status in his world - which is a world of pint-sized whiskey bottles, wine coolers, and pep talks. (Bingham actually speaks at public events, not necessarily preaching ordinary virtues - he likes to tell people to "empty their backpack" of heavy, excess relationships.)
I'm actually somewhat perplexed by the ending (in a good way), which seemed to purposefully contradict itself somewhat, but I know I need to see this thing again. I'm delighted, somewhat entranced, and pleasantly numbed. I'm also pretty sure it's not the best film of the year, but it's gutsy and it's mostly great stuff - let me digest it some more.
Posted by Chase Kahn at 1:53 PM