Not even the wonderful Frederic March or Olivia de Havilland can save Mervyn LeRoy's Anthony Adverse ('36), an adaptation of the 1,200+ page Hervey Allen novel about a grief-stricken orphan (March) who falls on hard times everywhere he looks during the Napoleonic Wars in Europe. 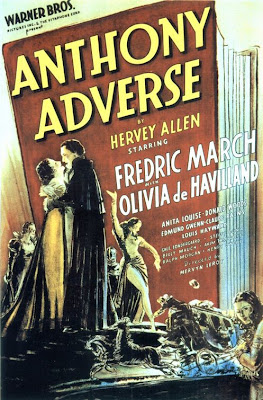 The film, produced by Warner Bros. and a recipient of 7 Academy Awards nominations (including Best Picture) is a sprawling, 141-minute, lifeless adaptation. Clearly Allen's novel is a detailed, thorough and fictional account undeserving of this bullet-point recreation by LeRoy and screenwriters Sheridan Gibney and Milton Krims (uncredited).
Once Anthony (March), given the last name 'Adverse' by his various father figures in awe of the boys adverse conditions, travels abroad, where he is driven by greed and corruption in Africa, the story is intended to become tragic and ill-fated - instead it feels miscalculated. Too much time is spent on the opening 30-minute prologue (which details the time and the conditions in which Anthony was born) that there isn't ever time for the film to breathe or coalesce in the later scenes which are undoubtedly more worthwhile and meaty in their resolutions.
Anthony is supposed to be a victim of his era, a victim of war and fate, but the film's too quick and too off-kilter for the effect to be fully felt. Not even Erich Wolfgang Korngold's score can squeeze any drama out of this mess, and the wonderful Olivia de Havilland, who plays a lifetime friend and lover to Anthony, is criminally underused. The cast also features villain-extraordinaire Claude Rains and Gale Sondergaard, who would later be screen-tested to play the Wicked Witch in Victor Fleming's The Wizard of Oz ('39), but was ultimately deemed too "beautiful" for the part.