An all-star, all-female cast given to George Cukor on the rebound from him being removed from directing Gone With the Wind (due to creative or personal differences between himself and Clark Gable) and what you have is a bit of a long-winded, yet rewarding viewing experience if for nothing else than its embarrassing bounty of tremendous golden age actresses. 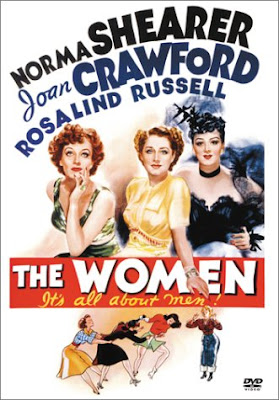 Norma Shearer, Joan Crawford, Rosalind Russell, Joan Fontaine, Paulette Goddard, and on and on. The film boils down to, among other things, infidelity. Almost every kind of women is represented here, from the gold-digging jezebel (Crawford) to the stingy, materialistic gossiper (Russell) to the sweet, loving, mother and wife (Shearer). It's got to be the biggest movie of all-time that doesn't have a male in its entire cast.
Hilarity and heartbrake ensues in this kind of head-spinning, jabber-mouth comedy/drama via a slick script and Hawks-ian dialogue and delivery. However, the film's central message of 'swallowing your pride' and not abandoning your man during times of marital unevenness and uncertainty is almost embarrassingly dated. The Women ('39) turns out to be a fascinating history lesson and an example of cultural disconnect between eras as Women's Lib was very much off in the distance.
Posted by Chase Kahn at 3:34 PM