I had a mini Vincente Minnelli marathon this week (more on that later) and the most prestigious and well-regarded musical of his that I watched was 1953's "The Band Wagon" starring Fred Astaire and Cyd Charisse.


Minnelli's film has more than a few similarities to 1952's "Singin' in the Rain." Both take place in the entertainment industry, both star performers who are feeling inadequate and both films run on manic, high-wire Technicolor energy from the first frame. One excels at it, the other doesn't.

"The Band Wagon," in my mind, is a mess. It starts off with promise - a washed-up song-and-dance man (Fred Astaire) is attempting a comeback on Broadway by taking the starring role in a musical interpretation of "Faust" directed by a hotshot actor/director (Jack Buchanan) and headlined by a renowned dancer (Cyd Charisse).

Like the scenes attempting to implement sound into, "The Dancing Cavalier" in "Singin' in the Rain," these early scenes take advantage of their comedic potential. The problem with "The Band Wagon" occurs when Tony (Astaire) takes on the production himself and rides it back into stardom, rescuing the rest of the cast and crew along with him. 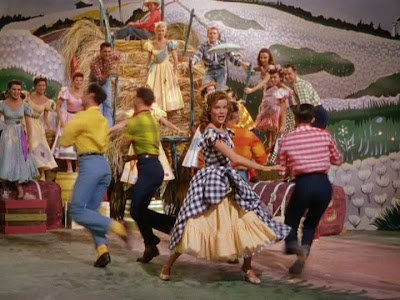 This "restructured" stage play (more true to their original intent before "Faust" came into the mix) is played out bit-by-bit as the group tours the country before opening in New York City. The effect is dizzying and this piecemeal unveiling of the production never coalesces, resulting in a product that is seemingly inferior to the supposedly wretched musical "Faust," which inexcusably, we never get to see.

And the musical numbers, with the exception of the wonderful noir-spoof finale, "Girl Hunt Ballet," are mostly a drag. "That's Entertainment!", "Louisiana Hayride" and "Triplets" are all gleefully underwhelming in the worst way, and seeing Fred Astaire's Abe Vigoda-like mug in the proportionately out-of-whack form of a 3 1/2-foot tall baby is hardly the kind of entertainment that "The Band Wagon" thinks its providing.
Posted by Chase Kahn at 3:36 PM