Roland Emmerich's 2012, which finally comes out on Friday (Sony/Columbia, 11.13.09), is obviously the director's biggest apocalyptic get-off movie of his career and seemingly a life-affirming kind of feature and culmination of all his sub-par blockbuster extravaganzas (Independence Day, The Day After Tomorrow) leading to this point. Nevertheless, it looks like it will keep in tune with all of his previous works -- monument demolition, tidal waves, presidential speeches -- with an updated, 21st century digital sheen. 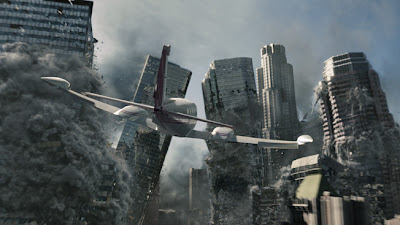 The first reviews are in (83% RT) and the consensus is clearly, even in the early stages, that this is a megaton disaster flick selling preposterousness and mindless detour for anyone who's willing. Yes, 83% is high, but all of the positive reviews indicate that 2012 is more of guilty kind of fun, reminding me of the early reviews for G.I. Joe: The Rise of Cobra.

Emanuel Levy chimes in with his [C+] review:

"Puncuated by eight or nine big, expensive CGI set-pieces, the shamelessly derivative narrative makes sure to include every possible catastrophe imaginable, setting the action scenes on the air, under water, on the ground -- you name it. In the course of the film, the hero (John Cusack) drives every vehicle imaginable through fire, earth, ash, clouds, earthquakes, and water."

"The movie unfolds as an adventure ride, sort of a day spent and Disneyland, samplin all the attractions you can stomach, without takinga break or a pause to breathe. Opinions will differ as to what extent 2012 is a pleasurable joy ride or an endless series of crashes, earthquakes, and explosions. Throughout, intentionally or unintentionally, the movie walks a fine line between the darkly humorous and the outrageously risible. The dialogue needs to be heard to be believed."
Posted by Chase Kahn at 1:36 PM