The first adaptation of Edna Ferber's epic historical fiction novel (published in '29) was Wesley Ruggles' Cimarron ('31) for RKO, starring Richard Dix and Irene Dunne. I watched it for the first time recently and, like most big-budget, early-sound era spectacles of the 30's and 40's, I found it engrossing and engaging on a historical-film level, yet obviously and unmistakably compromised by the heightened showbiz and silent-era amplification that took place with many of the films of that period.
It's a indisputable early sound achievement, still bearing marks of a silent picture glossed with yet to be refined transitional glitches -- muffled dialogue, pounds of make-up, stage acting, etc. It's a film that depicts the fourty years between 1889 to 1929 as an ever-changing landscape and it does it in a half-convincing manner.
Is it a great film? No, it's too played-up and put through the Hollywood romanticized wringer, but I was attracted to the idea that Yancey, an adventurer at heart, couldn't keep himself hitched in one spot and was seemingly beckoned by the unclaimed lands to the West and the life of open-range spontaneity. The flip side is portrayed when Yancey is forced to kill an old friend (The Kid) for shooting his town of Osage. "I used to ride with him, sleep with him," he says. 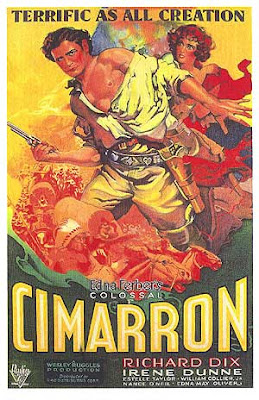 Like The Great Zeigfeld ('36), another "dated" Oscar winner, I found it easy to admire and slip into this as a piece of history and frankly don't understand any adamant disregard or malignant attacks against it to this day. Yes, I'll give you that Richard Dix's performance is poorly animated and hammy and that Isaiah, a teenage African American servant to Dix's Yancey Cravat, is embarrassingly stereotyped as a goofy, hard-labored, watermelon-chomping "yessum", but any claims of improper and blatant racism is simply misplaced, in my mind.
I just find it hard to believe that Cimarron is a purely racist film when Yancey (Dix), the film's protagonist, is portrayed as such a radical equal rights activist in certain scenes. He mourns the death of a black character halfway through, he lets a Jew sit front-and-center at his sermon, allows his son to marry a Cherokee Indian and then practically derails his marriage over a difference of opinion in regards to Indian rights in Oklahoma.
The facts are that not only was 1931 a drastically different era in terms of racial equality, but so too was (and even more so) the turn-of-the-century land rush in which Edna Ferber's source novel takes place. It was a different time and a different place -- old people are racist no differently than old films and old literature are.
Posted by Chase Kahn at 2:21 PM