One of the most fascinating projects that's been gearing up and unspooling in the news over the past month or so is the Coen brothers' reimagining of Henry Hathaway's True Grit. The 1969 western was adapted from a novel by Charles Portis, written one year prior, and earned John Wayne his first Academy Award for Best Actor. 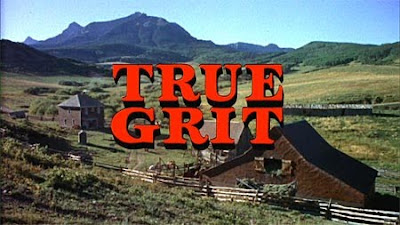 News first broke of the casting about 6 weeks ago, as it was announced that Jeff Bridges would star as the legendary drunken Marshall Rooster Cogburn (Wayne) with news following that supporting roles would be filled by Matt Damon in Glen Campbell's role and Josh Brolin as Tom Chaney, the killer of a young girl's father, who is subsequently tracked down by an unlikely threesome. You can read this Playlist script review of the new film, which appropriately (but perhaps too harshly) calls out the 1969 original.
The Kim Darby role has not yet been cast.
Hathaway's film is an easy sit, Wayne is spectacular, and the Colorado countryside is a spectacle, but most of the time, you can't help but feel like it's a good Sunday afternoon CBS serial that aired in the late 60's, watched by Bobby and Sally Draper in AMC's "Mad Men". It's a nice film, but Wayne can only sarcastically spit one-liners and slurp down jugs of whiskey for so long. Then when a kick-ass finale is needed, we're left sorely disappointed.
Although, I can definitely see why Joel Coen and Ethan Coen, with their misanthropic scruffiness and cultural perception, would find interest in this story. The upstream, downstream currents of the differing agendas between characters and the flawed nature of Rooster Cogburn should certainly prove as attractive as the promise of another Coen brothers entrenchment into an era of civilization unrecognizable by modern standards. (Think 90's snowbound Minnesota, 60's Jewish suburbs, 80's West Texas).
Shooting is slated to begin in March of this year, with a release in the fall/winter. This current stretch of Coen brothers output, beginning in 2007 with the Oscar-winning No Country For Old Men and culminating into the masterful A Serious Man this year is proving to be rewarding for willing viewers. With the pair delving into classical western territory, it's must-see stuff.
Posted by Chase Kahn at 5:48 PM