Darryl F. Zanuck, after purchasing Fox studios in 1935 and forming 20th Century Fox, contributed to the studio system blowout of 1939 with one of the year's most financially successful films, Henry King's Jesse James.
Now, upon the 1935 merger, Will Rogers died tragically in a plane crash while James Dunn and Spencer Tracy were dropped for heavy drinking. Therefore, Zanuck purchased the contracts of three young, up-and-coming leads who would be the face of the studio for years to come. They were Tyrone Power, Don Ameche and Henry Fonda. 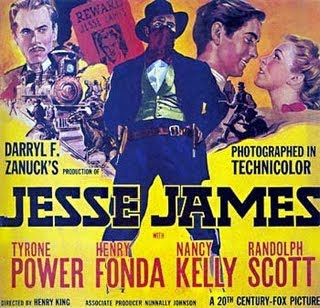 Although the studio wouldn't experience any relevant level of popularity until after/during WWII, the biggest film of the studio's young infancy in the late 30's was, in fact, Jesse James -- which starred Zanuck's two greatest leads in Power and Fonda, and managed to create crowd traffic in a year populated by MGM's The Wizard of Oz, Columbia Pictures' Mr. Smith Goes to Washington and David O. Selznick's Gone With the Wind.
Shot in Technicolor, Jesse James is a horribly glorified and fictionalized account of the infamous outlaw of the post-war West, turning the titular gunslinger into a Robin Hood-type holy perpetrator of misdeeds for the greater good by making him a victim of railroad businessman corruption and greed. It's also paced like a NASCAR race with too many caution flags -- breathless and expedient one minute, meandering and lifeless the next. But I enjoyed it regardless.
I enjoyed it for the range of its vision, (from Jesse's transformation to outlaw to his death by assassination), and for its surprising lack of a score in an age when movies were overscored to a fault -- it was great to watch the assassination scene at the end not punctuate by a Max Steiner blow to the head. Despite its many faults (like the overnight proclamation of Jesse from victimized farmboy to notorious outlaw), it's a kind of an endearing movie in some ways because of its shameless audience pandering. For all of the nonsense, it's compelling, I'll give it that.
I also enjoyed Tyrone Power a lot more here than I did in Henry Hathaway's painfully dull The Black Rose ('50), although Henry Fonda, as usual, has the standout performance for me.
It's also notorious for a scene in which Frank (Fonda) and Jesse (Power), leap off of a cliff on horseback during a third-act getaway scene. Much to the American Humane Association's disapproval, the horse actually fell to its death. The first time that a Hollywood production came under fire for their mistreatment of horses. Don't let these guys see Andrei Rublev.
Posted by Chase Kahn at 9:22 PM