There's something wholesome, almost hokey, about Tex Ritter's title song that plays over the opening credits (and then ad nauseum throughout) of Fred Zinneman's High Noon. Yet, it's one of my favorite title sequences of all-time and Ritter's song turns out to be a lynch-pin in this classic western, one of the most socially relevant parables about community self-reliance and blacklisting allegory to boot. 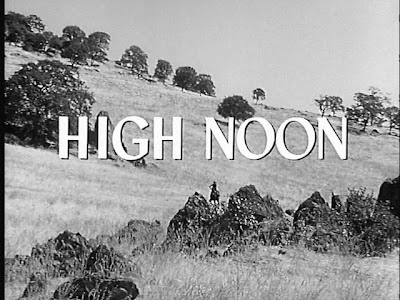 It's so beyond 'black hat', 'white hat' linearity and genre predictability, almost entirely devoid of saloon shootouts, horseback chases and any indulgence of typical western yee-haw fisticuffs in-between. High Noon represents an iconic western that doesn't flaunt, show-off or strut. It's in 1.33:1 B&W, it's 90 minutes long, it's leisurely-paced -- like Ritter, it's just sittin' back and hummin' along.
Through it's depiction of a town in crisis, just over an hour before the arrival of the native outlaw Frank Miller by way of the noon train, it brings resonant social truths to the surface about self-preservation and cowardice. As Marshall Kane (Gary Cooper) is preparing to face Miller and his three baddies, he goes on a seemingly door-to-door journey through the town attempting to find a suitor for his deputy badges. It's here where Kane discovers the "passive", "leave it alone" attitude of his fellow townsfolk, some of them good friends of his, who refuse to join arms and stand side-by-side for what's right. It's basically a journey into the heart of apathy and selfishness.
In fact, they can't even fathom why Kane, who has just married his quaker wife (Grace Kelly) and quit his job as Marshall, would even bother coming back to defend the town at all, they're so blind they can't even see the good deed at play. "After all, it's Kane that Miller's after", they retort. One of my idols, Jeff Wells at Hollywood-Elsewhere.com, had this to say about Zinneman's Western classic:
"The bottom line is that there aren't enough films in the world that say what High Noon says loud and clear, which is that average small-town people are mostly fair-weather sheep -- decent and friendly as far as it goes, but scared silly when push comes to shove, the heat's on and the chips are down. I love that High Noon isn't a true "western" as much as a parable about individual heroism and community cowardice.

Say it again -- most people are no damn good & lack the necessary backbone when a threat is hovering and their financial security may be threatened. If nothing else, may each and every person on the planet understand that in the end you have to depend on yourself and no one else to do the hard thing. Tell me of another film that conveys this basic reading of human nature with more clarity or force."

More historically speaking, of course, is the fact that High Noon was a definitive allegory against Hollywood blacklisting that was ongoing during the course of the film's development. Foreman wrote the film to illustrate how hollywood refused to stand up to the HUAC (House Un-American Activities Committee) while their friends, family and co-workers were being hunted down for thier political beliefs.

John Wayne and Howard Hawks were two figureheads in the movie industry adamantly opposed to Foreman's views and High Noon. After the film's release, Wayne called it, "the most un-American thing he'd ever seen," and thus, Foreman was blacklisted -- something that Wayne himself never regretted doing -- he even teamed up with Hawks for a rebuttal in Rio Bravo ('59). It wasn't until 1997 that Carl Foreman was finally reinstated. He died in 1984. 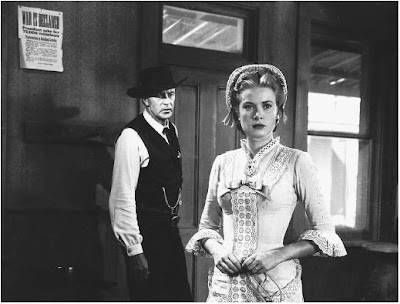 And so, High Noon is essentially about Marshall Kane's realization of this truth, which is universal even to this day, and how he responds to it, becoming the exception. Which brings me back to the title song, sung from Kane's point-of-view (with Ritter sounding similar to the deep-throated Gary Cooper) which has the same endearing homeliness and comfort of Kane's moralistic, saintly, dutiful character. Watching the opening two minutes or so with this context adds bounties of foreshadowing and cool-cut irony.

The baddies, assembling to ride into town and await the return of Frank Miller, are without their knowledge, riding to their death by the one man who had the decency and the effrontery to do what's right. The good side of human nature will win out in this end, and spiking the tin star in the dirt never felt so good.

You can watch the opening credits to Fred Zinneman's High Noon here. I'd embed here, but no codes.