George Stevens' Shane ('53) is a classical Technicolor Western about a mysterious gunfighter (Alan Ladd Jr.) who becomes protective of a small mountain community against the vicious landowner tag-team of the Ryker brothers. Later remade by Clint Eastwood into Pale Rider ('85), this original is more tender and calculated and resists cartoonish indulgences.
Beautifully lensed with the Wyoming mountainside ever present in the background, it has this unusually welcome lodgehole-pined, fringed-sleeve, Pacific-Northwest setting with its blueish-purple skies. (Scenes of the Starrett Ranch were filmed around Grand Teton National Park.) 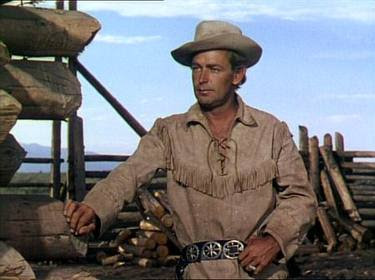 What I really love about the film (in what is an apparently very close adaptation of the source novel by Jack Schaefer, written in 1949) is the way that Shane (Alan Ladd) so clearly longs to be in the shoes of Joe Starrett (Van Heflin) who has a wife, a kid, a piece of land, the dream. He's a gunfighter at heart and the film is essentially about his inability to escape the past, his true character at heart. The closest he'll ever get to having a family is in the final hour or so when he decides to protect the Starrett's home from the ruthless Rykers and their hired gun, Jack Wilson (Jack Palance).
The situation is delicately handled -- there's no forbidden kiss or obvious suggestions between Shane and Marian (Jean Arthur) -- it's simply known by the subtleties of the performances, the gestures, their actions, etc. The only other Western that George Stevens ever directed was Annie Oakley ('35), starring Barbara Stanwyck -- Shane remains one of the director's greatest achievements and one of the crowning works of the genre.
An interesting note that I read was that, upon the film's release, it was projected in a 1.66:1 aspect ratio at first-run venues, despite being shot at the Academy standard ratio of 1.37:1, the ratio that we know to this day. Montgomery Clift and Katharine Hepburn were originally considered for the roles of Shane and Marian.
Posted by Chase Kahn at 2:53 PM