Anthony Mann's The Naked Spur ('53) was the third of five westerns that the director collaborated on with Jimmy Stewart from 1950-1955. Although not as compulsively entertaining and rollicking as their debut effort, Winchester '73 ('50), this film shows the two operating on a different kind of level. 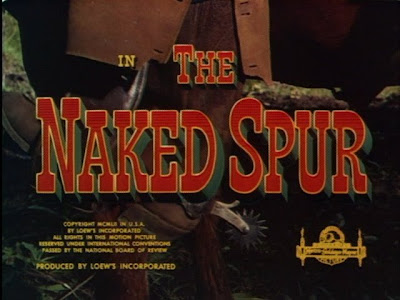 The Naked Spur is essentially a psychological road-western about a man (Stewart) who may or may not be a lawman escorting a criminal (Robert Ryan) back to Kansas for a $5,000 reward. The screenplay by Sam Rolfe and Harold Jack Bloom, which focuses heavily on brain over brawn, was nominated for an Oscar and deservedly so. The way the five characters each interact with each other given their differing agendas and personalities makes for a better film than any high plains or back-alley shootout could ever duplicate.
It's a quaint, quiet, 91-minute thing, shot in the beautiful Colorado mountainside, and it's a gem - featuring one of Stewart's best performances as the morally compromised captor who must attempt to hang on to his goodness as well as his cargo (Ryan). Mann's westerns have a reputation of being stripped-down and perversely revisionist with their depth and darkly ferocious characters and The Naked Spur certainly falls under that heading.
Posted by Chase Kahn at 10:11 PM