Bruce McDonald's Pontypool, an independent Canadian horror film released earlier this year, is an original, bold work -- knowing and unique, without an ounce of regurgitation -- but ultimately, it proves to be an over-hyped, overpraised one-set zombie film with a third-act revelation that proves extremely tough to swallow. It's crazy enough to distinguish itself and attract a small fanbase and loyal internet followers, but it's too crazy to actually work. 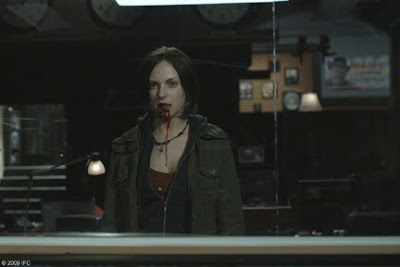 Taking place almost solely inside of a snow-barricaded radio station, with three principle actors, it chronicles the mutation of a zombie outbreak in the small town of Pontypool simply through the words and reportings of on-air personality Grant Mazzy (Stephen McHattie) -- what he knows, we know. And it does this to relative success in the first hour or so before, as I said, hitting a wall of hypocrisy which has been mistaken for headiness by many-a-reviewer.
Also, as a knowledgeable person on this front (I worked as an intern for a local radio station here in Dallas for a year), I know that a producer would never, ever talk as much in the ear of the on-air personality as Lisa Houle's character does here, even in the midst of an apocalyptic news report. McHattie's Grant Mazzy, being the laid-back, cowboy'd up, deep-voiced personality that he is, would have either called her out over the air to shut the hell up or yanked his headphones off, no question about it. Sometimes things drive me crazy for no reason in films and this was a prime example. It threw me out somewhat at first, and then, upon conclusion, left me extremely disappointed.
Posted by Chase Kahn at 11:30 AM