"If it were not a Clint Eastwood movie, if it were not Oscar season, it would probably be directed to HBO, shown during Black History Month." -- from David Poland's Invictus review posted today. 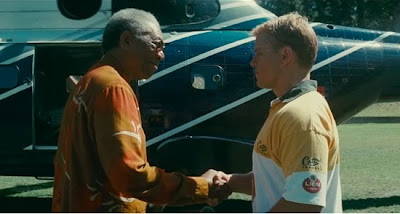 The Invictus stale-readings went haywire especially after Jeffrey Wells' mixed-positive reaction on 11.27, when he called the film "second-tier" Eastwood and "a bowl of fettuccine." (i.e. good for what it is, mildly satisfying, but don't expect to be blown away, much less surprised.)
I've said this once and I'll say it again: Invictus will be the Frost/Nixon of this year - an historical drama that easily pleases and slightly stirs the over-50 crowd (especially those who want to be Clint Eastwood and cherish everything the man ever did or does) and critical output will be strong, but those who like real films that take real risks and don't conform to formula and easy-viewing will treat it like the plague.
Posted by Chase Kahn at 4:54 PM