I'm furiously consuming as many westerns that I can in an attempt to gain a stronger foothold in the genre, which will eventually turn into a giant "best western" list. I've seen a lot of great ones over the past week or so, but William Wyler's The Westerner ('40) isn't one of them.
It's a Gary Cooper-Walter Brennan fictionalized retelling of the Judge Roy Bean tale, with Cooper at his usual morally-guided, soft-spoken self intervening into the heinous, illegal trials of the Judge (a tremendous Walter Brennan), specifically his ongoing feud with neighboring homesteaders. 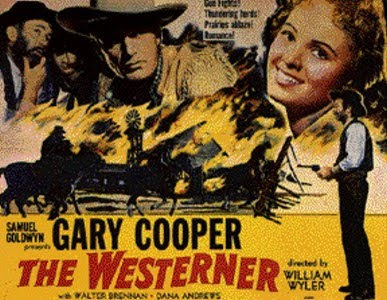 For an hour or so, it's a very light, comedic and ironic retelling -- Lillie Langtry, whiskey, double standards, etc. -- before turning into a private battle between Cole Harden (Cooper) and Roy Bean (Brennan) over the Judge's mistreatment of the homesteaders, specifically the Matthews family and their beautiful daughter, Jane (Doris Davenport).

It's a decent-enough diversion for the duration until the final scene, in which Cooper inexplicably turns mushy on the ole Judge. It's one of those early studio sound era bow-tie endings that you run into from time to time where the pedigree or persona of the actor/actress of the time is so large that it creates unearned sympathy for the performer, not the character. The same thing happened at the end of Irving Reis' The Big Street ('42) with Lucille Ball. It's what I like to call the "actor ending."
I suppose it worked, as Brennan earned an Oscar for Best Supporting Actor.
Posted by Chase Kahn at 3:27 PM