It's no biggie (and certainly not post-worthy) but I'm doing it anyway. This poster (and subsequent DVD cover for the recent Warner Bros. re-release) for Michael Curtiz's The Adventures of Robin Hood ('38), one of the best sword-adventures of all-time and certainly Errol Flynn's most recognizable screen role to date, depicts the titular action hero and folklore legend donning a green hat.
The only problem is that Errol Flynn's Robin Hood never wears a green hat during the course of the film, not for one second. I just watched it and it's brown throughout. 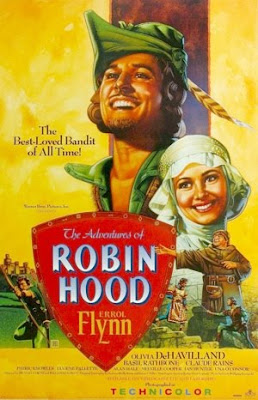