Most people wouldn't agree with me, but Michael Curtiz's Virginia City ('40) is a dusty, sweaty, intricately-plotted early studio western, and for my money, it kicks the ass of the director's own Dodge City ('39) - which featured a lot of the same cast members and was ultimately a bigger hit for Warner Bros. and their leading man, Errol Flynn.
Not that I'm not a fan of Dodge City, but I much prefer the Sol Polito black & white lensing, the Max Steiner score, and the overall grand sweep of Virginia City - a sprawling war-time, reverently patriotic thing about a Confederate gold-smuggler (Randolph Scott) and a Union officer (Errol Flynn), sworn enemies, who square off in the waning days of the Civil War. 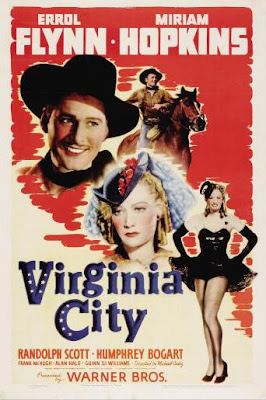 Some might find the final act of the film hokey, convenient or contrived, but I bought it. I bought the optimism and the portrait of humanity as the end of an era gives way to start a new beginning - which is summed up through the actions of our main characters by none other than a shadow of Abraham Lincoln. It has an air or quality to it reminiscent of the works of Howard Hawks or John Ford.
Plus, it also features a pre-Casablanca Humphrey Bogart as a Mexican bandit with a bad moustache and a bad accent, worth the price of admission (or rental/viewing/what have you.)
Posted by Chase Kahn at 4:34 PM