I was making a mental list this morning of films opening on Thanksgiving Wednesday, usually a terrific time to see a load of films, and am now hopelessly depressed to find that, in a pretty good 2009 for movies (certainly better than '08), that there isn't much happening next week. 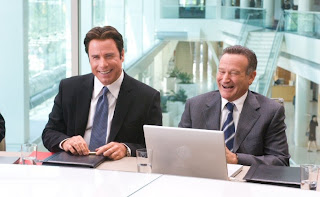 John Hillcoat's The Road and Wes Anderson's Fantastic Mr. Fox, the stop-motion animated Roald Dahl tale, are the only films opening that I have any interest in. Other than that, you get the repugnant male-comedy pulverizer Old Dogs, starring John Travolta and Robin Williams, and Ninja Assassin, which looks and sounds and feels too much like Blood: The Last Vampire to factor into the equation.

Meanwhile, Christmas looks heavenly with Tom Ford's A Single Man, Rob Marshall's Nine, Pedro Almodovar's Broken Embraces and Peter Jackson's The Lovely Bones, plus Guy Ritchie's Sherlock Holmes if you're in the mood for some holiday 19th-century London shenanigans. Part of the problem was the Weinstein's decision to movie the star-studded musical Nine from Thanksgiving to Christmas, tilting the balance of power.
Posted by Chase Kahn at 9:04 AM