Reading around the internet this morning after Spike Jonze's Where the Wild Things Are pulled in $32.5 million over the weekend, I found this highly entertaining review/dissection of the film by David Poland at The Hot Blog, which brings up a fascinating (and mostly accurate) interpretation of this multi-layered film.
"Simply put, it is a great film about divorce and its effect on children of this generation...The psychological positioning of each of the "wild things" on the island is distinct (and distinctly blurred when appropriate), starting with Max's father, Carol (James Gandolfini), who is no longer a central figure in Max's life, but who once promised -- by an inscription on a globe -- that Max could rule the world. Dad Lied."
"Mom, embodied by KW (Lauren Ambrose) here, is the realist in this family and is trying to give her truth to her boy while still loving him so much that she has to fight off her instinct to indulge a more simplistic kind of protection of his innocence."
In my 10.16 review, I saw the fantasy sections of the film to be a more general embodiment of Max's world and the spectrum of emotion and confusion that he experiences on a daily basis, but this is certainly a legitimate and fascinating reading of the film. 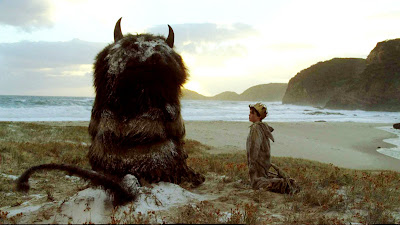 Why the thought that Carol represented Max's now absent father never crossed my mind during the first viewing is mind-boggling to me as it's so obvious now that I think about it. Of course, the gist of the film still remains the same -- that Max's trip to the fantasy land of the wild things is a re-imagining of his own psyche and the world around him in a way that's more relatable and identifiable to him.
I love Poland's description of Where the Wild Things Are as a psychological Wizard of Oz. You have the opening "reality" segment of Max playing in the snow, arguing with his Mother, etc. before he takes the trip to "Oz", only to return a more educated and renowned person.
Poland feels that the whole idea of the film, what it's leading to, is to Max's forgiveness to himself and to his mother for the divorce. Whatever the case, it's about learning and understanding how to grow up and how the frequently confounding and head-spinning emotions of adults and kids alike are constantly up in the air and unintelligible to the uninitiated.
There is just so much to chew on that I'm stunned at how many people are simply turned off by the "glumness" of it all. Saying that is lacks "narrative drive" is a concession that this viewer simply didn't get or didn't want to. Think of how rare it is to have a film that's based on a sentence-a-page kids book turned into a work of art, misunderstood by so many people already. One of the two or three very best films of the year.
I ate breakfast the other day and while waiting for a table, noticed the amount of children and their mothers who were bickering and arguing amongst eachother. "They need to go see Where the Wild Things Are", I said to myself.
Posted by Chase Kahn at 11:13 AM