Even though it's a significantly shorter and abridged version of John Woo's Red Cliff, I'm still excited for the Magnolia U.S. release (which is part of the studios 6-shooter film series) which will finally reach larger markets around 11.20.
The Chinese-language 280-minute epic was originally released in its native land in two parts (Part I in 2008 and Part II in 2009) as the most expensive Asian-financed film to date ($80m US). It has since gone on to become the highest grossing film in Mainland China's history ($124m US), although clearly benefitting from two seperate revenue streams. 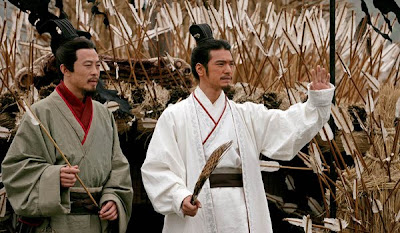 Generally described by a handful of U.S. critics as an elaborate and expansive eye-popping dreamscape with little substance elsewhere, it's hard to believe that the problems don't stem from this significantly dwarfed version - 150 minutes from 280 minutes.
Posted by Chase Kahn at 11:12 AM