So, Where Are They?

Spike Jonze's Where the Wild Things Are opens in 8 days (Warner Bros., 10.16.09), yet I haven't heard a thing about it. Usually with big-time, highly anticipated studio films, you'll hear rumors and read blogs about test screenings, guild screenings, so forth - but nada, nothing. That is with the exception of this Emanuel Levy review from his website:
"Facing the greatest artistic challenge of his career to date, one that has taken half a decade and a budget north of $80 million to execute, Jonze has set out to make an adult movie about childhood for both young and mature viewers, rather than a children's movie per se; the movie, like the book, does not talk down to young people. 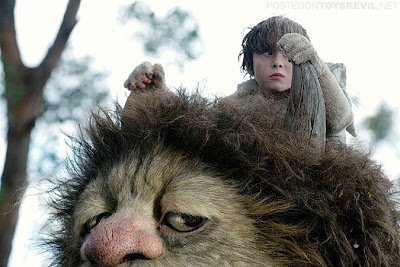 Since the nominal text is rather simple, the poignancy of the film resides in its rich subtext, and what is shown and implied but not stated. By necessity, Jonze takes the slim adventure further than the printed volume, delving deeper into Max's world, the unknown terrain of the island and the impetus that brings him there. In the process, he examines more fully the Wild Things, those volatile and endlessly expressive creatures, which represent the wild emotions within Max.
Ultimately, though, as a movie, "Where Wild Things Are" records Max's steps toward growing up, and acquiring self-awareness, as he gains knowledge and becomes conscious of the complex relationships the individual Wild Things have with each other and with him. Told with honesty from a child's point of view, "Where the Wild Things Are" reveals Max's increasing understanding of his own feelings and the feelings of others."
Levy has a pretty safe, broad appeal and he isn't a great writer, but he normally falls in line with the crowd and frequently is the first to review big studio films.
What Where the Wild Things Are needs to be is not just a chilhood 'learning to love what you have' story by virtue of an escapist experience to an imaginary land. It needs to delve into what it's like to grow up and wrap that in a drop-dead, fanciful and good-looking package. It needs to face the universal truth that children are emotionally unqualified and unconscionably cruel.
I have high hopes for this and a sugary, family-friendly sap-fest from Spike Jonze will not cut it.
Posted by Chase Kahn at 9:46 AM