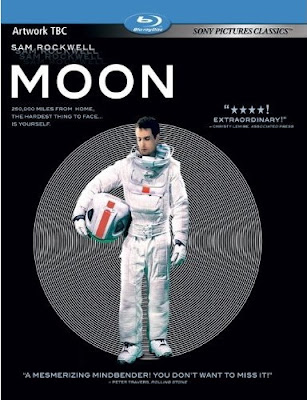 I saw Duncan Jones' Moon at the Dallas AFI Film Festival in April and thought it was pretty okay. To me, it's just a visually compelling film with a very interesting Sam Rockwell performance to say the least (plus Clint Mansell's score is really good in places), but I found it slight and too duct-taped together. Despite some spectacular lunar ingenuity, it doesn't have an original bone in it's body.

So I was more than a little surprised to see such enthusiastic remarks for the film throughout the summer as it saw an extended, popular art-house run. The Blu-ray comes out 12.29.
Posted by Chase Kahn at 9:04 PM