Shot on location in Italy, John Huston's Beat the Devil is a dark, twisted and playfully ironic crime comedy -- a perfect marriage, not only between the classic film-noir formula and the Western European landscape of street-side cafes and coast-lined hotels, but of two screenwriters working on otherworldly levels of creativity and ingenuity, Truman Capote and John Huston. 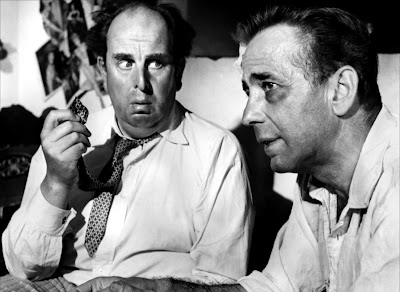 The script was literally being written concurrently with the actual shooting of the film and the dialogue has this perfect air of spontaneity and pre-meditation that the actors pull off brilliantly. Beat the Devil is very slyly funny and farcical with the easily distinguishable veneer of Huston's early straight-laced noir classics like The Maltese Falcon (1941) and The Asphalt Jungle (1950).
And rightfully so, seeing as how Beat the Devil was intended as a campy spoof by Huston of his early fedora-and-bare-knuckled Elisha Cook Jr. works. It's like The Maltese Falcon meets The Treasure of the Sierra Madre by way of Michaelangelo Antonioni -- all with a comedic air of tongue-in-cheek inanity.
Humphrey Bogart has no trouble sliding into roles like this, a crook joining ranks with a barbaric foursome of ill-fitting criminals to gain passage to Africa and score a big Uranium deal. But the star of the movie really is Jennifer Jones as the scheming, greedy and lying wife of a mysterious English gentleman who may or may not be a wealthy African landowner. The always welcome Peter Lorre also joins the cast with Gina Lollobrigida, Robert Morley and Edward Underdown.
Beat the Devil is currently in the public domain. Someone like Criterion needs to give this thing the big-time 2-disc restoration makeover treatment. It's a largely misunderstood and undervalued film -- one of Huston's best.
It's also known as having one of the most misleading and inaccurate one-sheets of all-time.
Posted by Chase Kahn at 10:24 AM