Mira Nair's Amelia (Fox Searchlight, 10.24) hasn't appealed to me in the slightest every since the trailer debuted sometime this summer. I hate the dramatization and tall-tale telling ("Why do you want to fly?"..."To break free", etc.) of these kinds of big-budget biopics. Plus Hilary Swank has been pegged for a Best Actress nomination since Febraury, which means that she'll be nominated regardless of the performance. 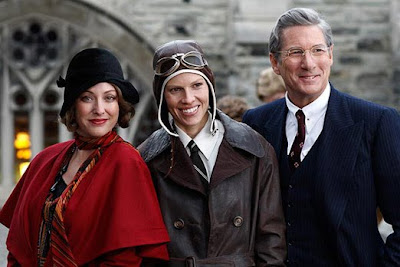 We have our first reviews from The Hollywood Reporter and Variety. The former, raving about Hilary Swank's performance, comparing it to Jamie Foxx in Ray and Phillip Seymour Hoffman in Capote, blah, blah.
Justing Chang at Variety, however, was pummeled by it:
"To say that "Amelia" never gets off the ground would be an understatement; it barely makes it out of the hangar. Hansomely mounted, yet dismayingly superficial, Mira Nair's film offers snazzy aerial photography and inspirational platitudes in lieu of insight into Amelia Earhart's storied life and high-flying career."
There is also a general assumption that the film doesn't totally work due to late screenings and notice from Fox Searchlight, perhaps in an attempt to guard it somewhat. Think of it what you will.