I've been watching a lot of bad movies of Blu-ray lately, because, well, that's what Blu-ray is for - giving you an excuse to watch movies you otherwise wouldn't touch with a ten-foot pole. Plus, it's actually a lot of fun watching bad movies that you expect to be bad. I get off on it like I'm sure Simon Cowell gets off on 300 lb. cows trying to sing Kelly Clarkson.

David S. Goyer's The Unborn (2009) D
This January horror drop-off is ludicrously awful. It's so bad that, like other reviewers have mentioned, it's almost unclear if we're supposed to laugh or squirm, so the majority of the running-time falls into this unclear haze of indifference. It's not even the best movie of 2009 that features the presence of a dybbuk.
Sean McGinley's The Great Buck Howard (2009) C
This is such a minor and innocuous film, which is a shame, because it has a nice little cast (Colin Hanks, Emily Blunt, John Malkovich), but it ultimately goes absolutely nowhere, kind of like this review. 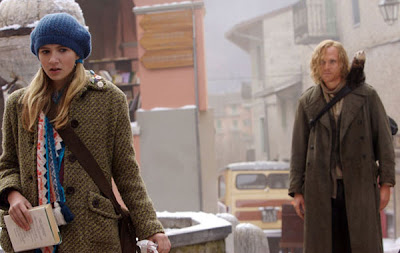 You know what? Not terrible. It's a rather odd British-y family fantasy movie, once again based on a children's book, but it doesn't even touch terrible with the exception of its very odd set design which has all kinds of continuity issues. Nevertheless, with the exception of Brendan Frasier, the cast is pretty good and it ends up being a decent sit because it doesn't try very hard. It's like the anti-Golden Compass.
Andy Fickman's Race to Witch Mountain (2009) C-
I don't know why I watched this. It continues to trend of The Rock playing the tough machismo badass stuck in a kids movie. It's essentially a road/chase film with surprisingly little humor. It does have decent production values, with real car chases, and Carlo Gugino is in it, but it still blows. The biggest problem I had with it was that The Rock's character, an ex-con, was really obsessed with Bullitt.
Renny Harlin's 12 Rounds D+
The New Orleans/post-Katrina setting actually gives the film an edge, but from the acting all the way to the swiss-cheese script, this is a mess. John Cena and his Tom Cruise in "Tropic Thunder" bear-claw meathooks are so distracting, I almost missed the glaring plot holes. We also get inadequate, power-hungry federal agents in this film, too, because there aren't enough of those in this world. The final scene in the helicopter is the stupidest thing I've ever seen and the film is way too long considering it's a rip-off of every Bruce Willis, Keanu Reeves 90's action movie. It would be a good drinking game to take a shot to every reference to "Speed" and "Die Hard With a Vengeance". 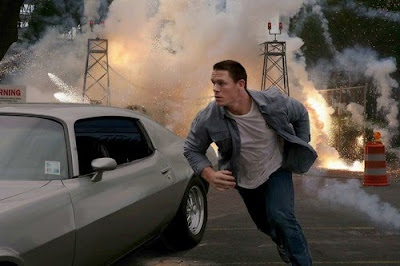