Oren Peli's Paranormal Activity is a micro-budgeted cult classic in the making, that is unless Paramount decides to give this a 1,000+ release, then it has all the makings of a cultural epidemic a la The Blair Witch Project in 1999.
To be straight, it's a mockumentary demonic-haunting film about a young, terrorized San Diego couple that is effective to say the least. Being a film that focuses on what happens when you go to sleep, Paranormal Activity preys on the vulnerability of its subjects. It's full of blue-tinted night vision freak-outs and still hallways with footsteps and swinging doors -- it puts new meaning to the term, "creaky house". 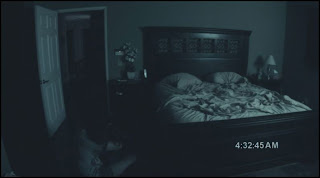 The problems that I had with it (which I saw at midnight in the recent expansion here in Dallas) start with a few convoluted backstories and end with the final scene. Director Oren Peli, working on a $15,000 budget, knows how to stage scares but he forces too much story and understanding on us and the ending is too easy and too much.
However, Paranormal Activity is definitely a great horror film in the scares department -- refreshingly void of an aggressive sound mix -- but it's not a great "film". Most of the 600 in the packed house at theater #9 in Northpark didn't seem to care. The bang-to-hype ratio is on-point and justified.
Posted by Chase Kahn at 10:14 AM