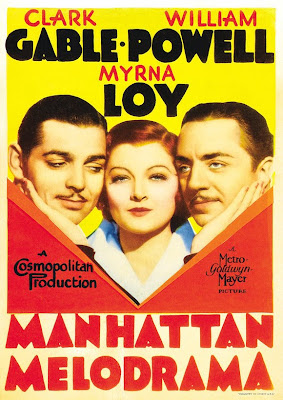 W.S. Van Dyke's Manhattan Melodrama ('34) is a clean-cut MGM gangster picture made at a time when James Cagney, Edward G. Robinson and Warner Bros. owned the genre in the early 30's. It closely resembles two later films: Michael Curtiz's Angels With Dirty Faces ('38) and a later Clark Gable vehicle for the director, W.S. Van Dyke's San Francisco ('37).
Clark Gable and William Powell play childhood friends who grow up on opposite sides of the law, Gable as a ruthless gambler/gangster and Powell as a public-approved district attorney.
This is no different than the way a no-good thug (James Cagney) and an old friend (Pat O'Brien), now a priest, battled ideologies and morals in Angels With Dirty Faces. Nor is it much different than in San Francisco, where a greedy, money-scheming club owner (Clark Gable) goes head-to-head against an old friend who is now a local priest, as well (Spencer Tracy).
Those two films are good early works, but where they are optimistic, god-loving and reverently sympathetic, Manhattan Melodrama is hands-off and favorably indecisive. I'm strictly speaking of endings here, because in my opinion, Angels With Dirty Faces is a more lived-in and gritty film through 80 minutes before it takes a turn for the worst in the final few scenes.

I just prefer that whole Clark Gable sacrificial, unyielding move at the end of the film ("die the way you live") which so beautifully resembles the last hours of the life of John Dillinger - a point made clear by Michael Mann at the end of Public Enemies ('09). This is opposed to the jolly and flowery final moments to San Francisco and Angels With Dirty Faces which closely resemble the holy and pure mentalities prevalent in the films of the early Hollywood studio system.

Manhattan Melodrama may be a bit more rough around the edges and feel way to boxed-in and claustrophobic with its dark interiors, but it gets my vote over those two films because it doesn't completely succumb to the expected outcome. Both Clark Gable's Blackie Gallagher and William Powell's Jim Wade stand their ground and that kind of blurry line between right and wrong, in the end, makes the film work.