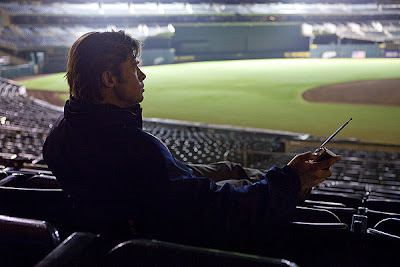 Instead, this engrossing-but-not-exhilarating, warm-but-not-sizzling underdog story (based on Michael Lewis' inescapable 2003 bestseller) comes to life in the bowels of the Oakland Coliseum, in white-walled, grey-carpeted film rooms, square offices and board meetings, reveling in awkward player-manager dynamics and colloquial cross-country telephone conversations.
-
It's in these smaller, more sporadic moments that "Moneyball" finds its swagger (an unorthodox trade deadline deal, a hilariously awkward dismissal of a player), feeding off of the unbridled charisma and eccentricities of its bewildering subject  (given glorious life by Pitt) who has no problem wringing solemnity from stagnation or fidgety aspiration from snarky dialogue, yet ultimately the film amounts to something less than the sum of its parts.
-
Of course "Moneyball" isn't the first based-on-a-bestseller true story about real-life figures who are bold, quirky, ardent anti-businessmen. David Fincher's "The Social Network" bares a resemblance even before it begins, yet sadly, the former lacks the sharpness, the ceaseless wit and the steel-eyed focus of Fincher's gently moving depiction of self-alienation. Both films are about the genesis of an idea, the excitement of discovery and specifically the man behind it.
-
Billy Beane, as written here and as portrayed by Pitt, is a fascinating subject, a man filled with failure, nonconformity and impassioned ambition, fighting irregularly for what so many crave: the pursuit of greatness, of immortality. Whether or not he accomplished this during his time at Oakland is left to the viewer to decide. Whether or not the film accomplishes this is sadly evident - it comes up just a bit short. [B-]
Posted by Chase Kahn at 9:35 PM