Of its many attributes, ironically "Drive," Nicolas Winding Refn's striking, white-knuckle crime thriller, is not notable for its speed. Sure, tires squeal and engines grumble, but what stands out about this instantly robust film (besides its stripped-down, retro-cool paint job) is precisely what isn't said - long droughts of silence building up into concussive ruptures of carved necks, splattered skulls. 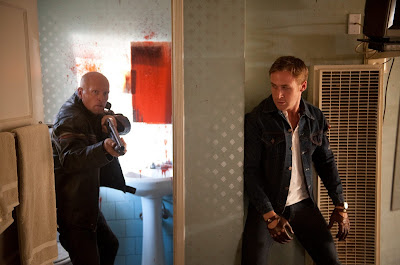 Most of the violence is dolled out by our nameless driver (Ryan Gosling) as he, a stuntman by day, a getaway driver by night, quickly finds himself deeper and deeper into the affairs of a crime boss named Bernie Rose (Albert Rose) after his cute, vulnerable neighbor Irene (Carey Mulligan) is indirectly threatened because of the debts owed by her convict husband.
-
Driver and Irene get to spend a good portion of the first half of the film staring into each other's souls and glancing awkwardly down their fourth-floor hallway, each hoping for the other to make their move. But this soon-to-be renegade stuntman is both cool and coy.
-
And when Irene is in danger, he's a madman - a regular Tony Montana - and the film's staggering, mounting outbursts of violence are glorious, gruesome, yet truly heartfelt outpourings of emotion from a man who is generally unemotive.
-
Yet for all of the film's steely brutality there is elegance - elegance in the way Driver spins his car out of trouble, elegance in the way Refn's camera follows him around the moonlit haze of Los Angeles, elegance in his selfless vigilante quest. Perhaps that's what make "Drive" such an exhilarating piece of genre - its ability to be both hardened and pink-chic. [A]
Posted by Chase Kahn at 10:25 PM