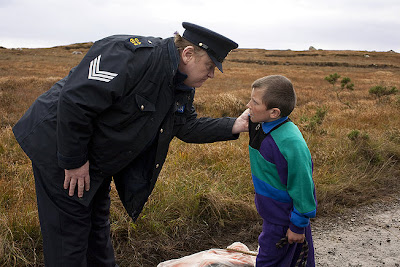 Beginning with a careless, youth-angst car wreck along the winding, wind-swept roads of Ireland's soggy Connemara region, where this edgy, quaint little buddy-cop comedy cozily take its place, a bulbous, burly officer lazily advances onto the scene, checks the now-ejected driver for a pulse (there is none) and subsequently rummages through his pockets, taking out a rolled-up plastic bag, removing its particles and placing a drop on his tongue as a yellow smiley-face flickers on the screen, followed by bold, as-large-as-the-screen type, announcing firmly, that this certainly is no affectionate, feeble piece of work.

-
The officer in question is Sergeant Gerry Boyle (Brendan Gleeson), a cheeky, aloof and belligerent veteran of the force who fumbles through crime scenes, hasn't met a pub he didn't drink at and isn't timid about his misanthropy or perceived racism when an African-American Federal agent (Don Cheadle) comes to town on the trail of a murderous drug-trafficking ring.
-
So sets the stage for John Michael McDonagh's pitch-black helping of dry Irish wit served up with a good dose of familiar "Lethal Weapon" plotting that nevertheless feels like the first cold-front of the year, a chilly, intoxicating breath of fresh air.
-
Like his brother's "In Bruges," McDonagh gives "The Guard" a hearty, subversive sense of humor wrapped around significant, weighty subjects and has no problem swerving in-and-out of the two nearly simultaneously, thanks in large part to the expert comedic chops of Gleeson, who really gets to have fun with this impudent, crass, yet endearing role.
-
As he and his FBI tag-a-long start sniffing aimlessly around the edges of the drug-lords led by Mark Strong's Clive Cornell (hey is Audioslave still together?), other officers of the guard become either dispensed with or merely bribed, so as to avoid any complications with an incoming/outgoing shipment in town. That is, all officers with the exception of Sergeant Boyle.
-
Ah yes, the foul-mouthed, indifferent, seemingly incompetent officer of the guard gets his chance to play hero in a world in which the only thing he seems to be good at is throwing back pints of Guinness. But even in its more predictable state, "The Guard" never really loses site of what it is, one finger on the pulse and another on the trigger. [B]
Posted by Chase Kahn at 9:42 AM