I don't know how I missed it, but John Carpenter's Big Trouble in Little China was released on Blu-ray two weeks ago and apparently it's a good transfer. Of course, the Kurt Russell Chinese-mythos cult action film is unquestionably a nutty, shlocky B-movie, but it's so damn entertaining and creatively silly that I can't believe there are people who can't enjoy it.
I love the steam-from-the-sewers, musty, grainy atmosphere and the inventive and just plain crazy special effects, makeup, costume and set design that give it its distinctive look. Which is why I was skeptical about a Blu-ray transfer, but apparently, as far as low-rent 80's cult classics go, it looks pretty good -- certainly better than any DVD you'll find.
That first back-alley Chinese gang war that Kurt Russell's Jack Burton accidentally drives into feels like a scene from a Double Dragon game. Plus Lo Pan and his three droogs with their sedge hats and supernatural powers are still legitmately scary dudes. It also features Kim Cattrall before she she appeared as Samantha on Sex and the City and turned into someone, at least in my eyes, more representative of a tore-up whore. Big Trouble in Little China is probably my favorite John Carpenter film outside of The Thing (1982) and Halloween (1978), I never have been a fan of Escape From New York (1981). 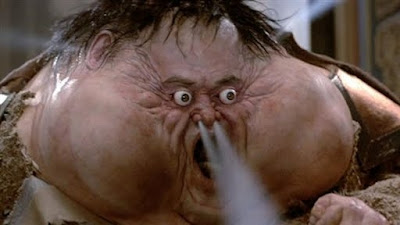