"Having Tea with an English Lady"

Alfred Hitchcock's The Lady Vanishes (1938) is one of the man's most underrated films and almost certainly one of the best from his early British days before Panavision and Cary Grant. This period of Hitchock shooting and producing films outside of Hollywood lasted from the advent of sound until Jamaica Inn (1939). The following year, Hitchcock signed with David O. Selznick to direct Rebecca (1940).
The Lady Vanishes is like a The Thin Man (1934) crossed with Agatha Christie. It's mystery plotted conspiracy film in which an engaged playgirl named Iris (the great Margaret Lockwood) is traveling back to England by train where she witnesses the disappearance (or does she?) of a certain old woman. Of course, no one believes her except Gilbert, played by Michael Redgrave, who seems to be more interested in Iris than the vanishing lady.
It's playful, fun, suspenseful -- all while emitting the kind of sure-handedness and patented flair that we would come to know from the director. When a suspense shot or a dramatic moment occurs, Hitchcock dispenses music with a train whistle -- eerily reminiscent of a high-pitched shriek. The interior happenings are cut up with just the right amount of low-angle exterior train shots and the plot is never unconvicingly silly, despite the obvious undercurrent of schtick. 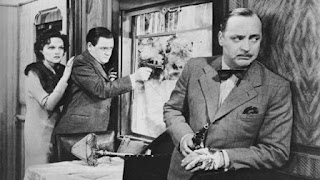 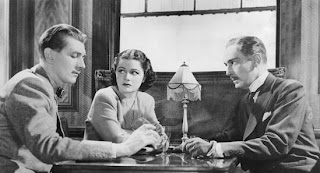