Terence Malick's The New World (2005), a fascinating, lyrical and poetic historical drama with an appropriate and deserved following is being released on Blu-ray on 09.08.09. Much maligned by many critics upon its release (I still don't know why), the film ran during its original theatrical run about 135 minutes. This Blu-ray, the same as the DVD released about a year ago, is the Extended Cut -- running about 171 minutes. 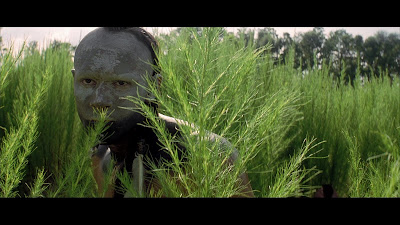 DVD Beaver just posted a review of the disc today, and it's all raves.
I've never really been emotionally attached to the film the way others are. The biggest problem I have is that I can never get involved or entrenched in this version of the classical romance between John Smith (Colin Farrell) and Pocahontas (Q'Orianka Kilcher), and Malick's obligitory voiceovers don't help matters.
Having said that, The New World is without question one of the most beautifully rendered and artistically composed films of the decade. Essentially a montage of sights and sounds with almost Bresson-ian like performances from the leads (Christian Bale plays John Rolfe in the latter half), it's an amazing experience, although I've never seen the extended 171-minute version.
Posted by Chase Kahn at 10:49 AM