Roger Ebert is a Basterd 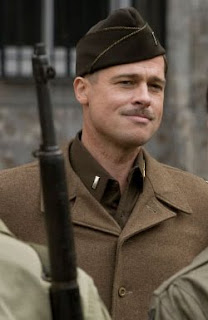 The much maligned showing that happened three months ago in Cannes is not showing amongst domestic critics this week. Roger Ebert just gave Quentin Tarantino's Inglorious Basterds a four-star rating, falling in line with James Berardenelli, The Village Voice's J. Hoberman, Variety's Todd McCarthy and New York Magazine's David Edelstein as supporters of the WWII spaghetti western where a band of Jewish soldiers slaughter and reign terror on the Nazis.
From Ebert's review:
"Quentin Tarantino’s “Inglourious Basterds” is a big, bold, audacious war movie that will annoy some, startle others and demonstrate once again that he’s the real thing, a director of quixotic delights."
"And above all, there are three iconic characters, drawn broadly and with love: the Hero, the Nazi and the Girl. These three, played by Brad Pitt, Christoph Waltz and Melanie Laurent, are seen with that Tarantino knack of taking a character and making it a Character, definitive, larger than life, approaching satire in its intensity but not — quite — going that far."
Of course, a Tarantino film getting good reviews is hardly news, but with the Cannes reaction and talk of QT himself becoming a washed-up admirer and historian of films but nothing more, it's surprising that the reaction has been positive across the board from major U.S. critics like Ebert, McCarthy, Edelstein and Hoberman.
The New York Times and LA Times will weigh in later today. Basterds of course, opens tomorrow (08.21.09) in 3,000+ screens.
Posted by Chase Kahn at 9:28 AM